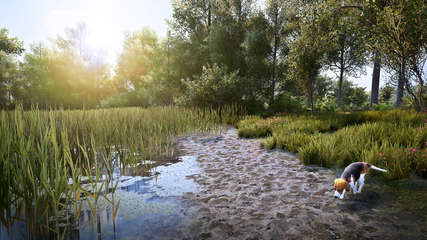 It's open season!
In stunning natural environments, choose your gear from the best official weapons and accessories and set off with your dog in search of a variety of animal species in this hunting simulation.

Hunting in an open world
Explore the plains of Colorado, the Texan desert and the forests of Eastern Europe in vast open worlds of over 6 square miles.

A wide variety of animals
Track down 33 animal species in their natural environment by using the best hunting techniques. Locate animal tracks and follow them to reveal your prey.

Realism at the heart of the game experience
Hunt animals with realistic behaviours and advanced artificial intelligence. Aim accurately to ensure you don't ruin your trophy.

A faithful companion
Use your hunting dog to track your prey. Labrador Retriever, German Shorthaired Pointer and Beagle, each dog has its specific hunting attributes.

Lots of equipment to choose from
Kit yourself out with over 160 weapons, accessories and clothing items from the best brands: Browning, Winchester, Bushnell, Kryptek, Verney-Carron...